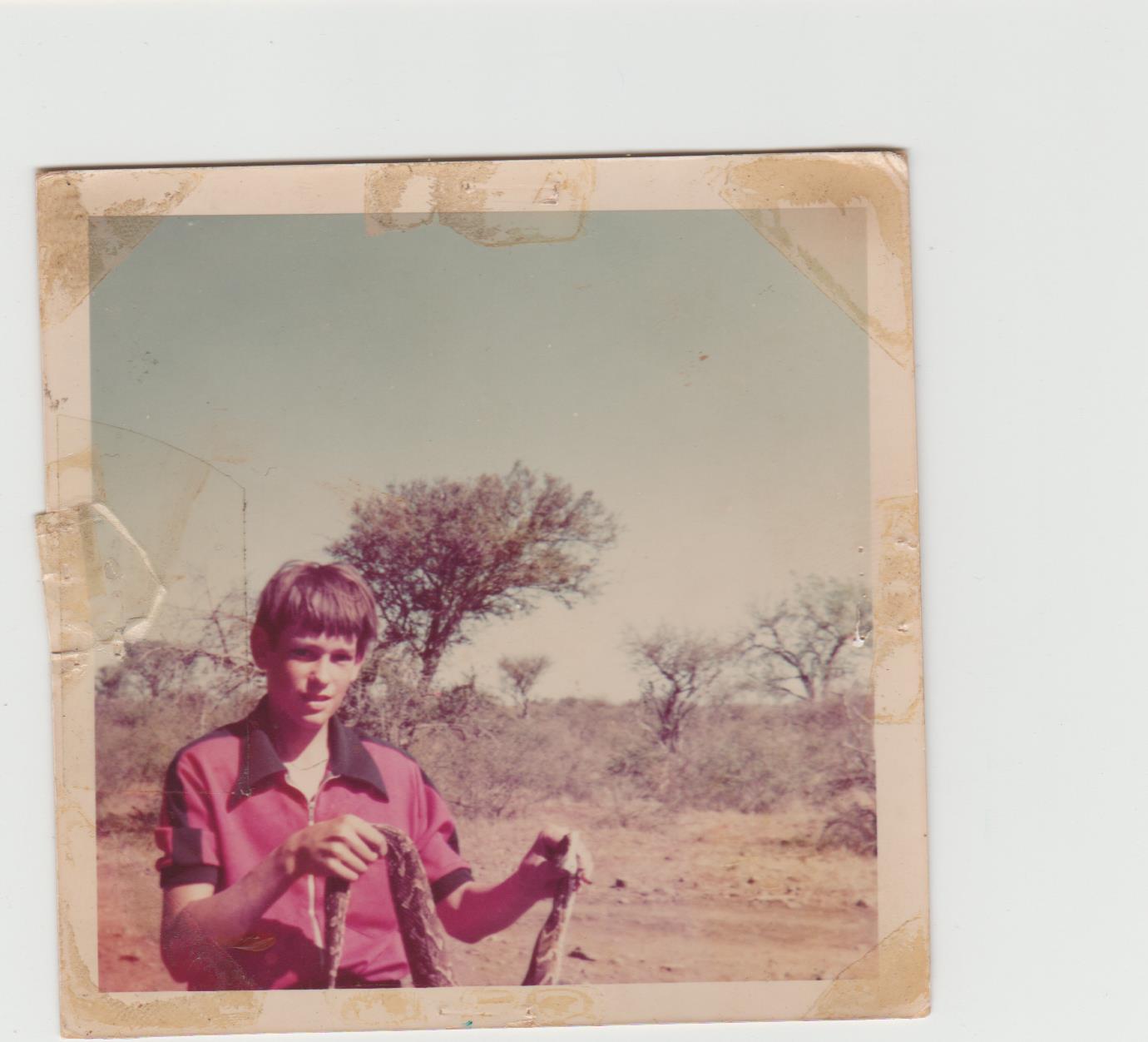 I spent a while this week wondering what to write about, but I guess it shouldn’t have been too hard a decision after Mel suggested last week that I wrote about some of my snake catching stories from my earlier years. There are many of them as you can imagine in that I started when I was 5, so that’s nearly half a century to choose from.

It all started when I was at Nursery school in Zimbabwe and I tried to catch a snake for a girl (some say I started young!). It was a Herald or Red-lipped Snake and things didn’t quite go to plan as it bit me immediately. Thankfully they aren’t dangerous to humans but I did have a headache for the next hour and I did lose of bit of my reputation. We at least stayed friends for many years after that.

Growing up in Zimbabwe during the 1970’s meant that I was at Boarding school from the start and so Mum and Dad didn’t get to see too much of what I got up to. Throughout my junior school days I started keeping snakes and although they were generally the non-venomous ones (the school did have to be a bit responsible) I did catch and keep many rhombic night adders and a few cobras. 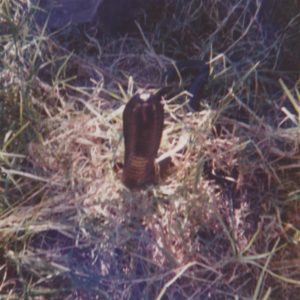 That reminds me of a story my Mum tells me. As a young boy I came home for holidays and I asked my Mum if I could have a rabbit as a pet since all my other friends had rabbits and guinea pigs. The answer was “No, who do you think will look after it when you are back at school.” With that she drove off and when she came back an hour or two later she found me sitting under the conifer trees in the garden with my friends. She asked if I had gone and got a rabbit at which I responded “No.” She wasn’t convinced and walked over to investigate, only to find that we were sitting on the ground with a baby cobra in the middle of us. I think she regretted having turned my request for a rabbit down, and in time I think she relinquished because I remember having many rabbits and guinea pigs as pets after that but I also had my snakes!

Senior school was not much different except that the variety of species started to change and we had more cobras, boomslangs and various others in the school snake pit. Our school held annual natural history expeditions where we often collected specimens for museums. 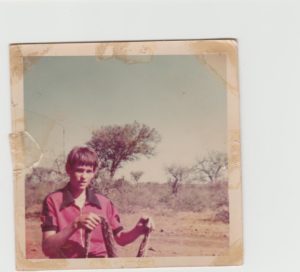 On my 1st expedition as a 13 year old I caught my 1st puff adder which was no mean trick either, as it was inside a natural hide and was tangled up in amongst the roots which required me to catch and release it a few times before I could disentangle it.

We were in the Magadigadi region of Botswana and our group was heading off to collect firewood. All of a sudden we slammed on brakes and I went sliding down the load bay of the truck into all the bow-saws and managed to slice my hand open on one of the blades. Anyway that was soon forgotten about when I was made aware of the snake and before anyone knew what was happening I was running through the scrub chasing it. I grabbed it by the tail at which point it turned around and looked at me- good time to let go I reasoned and it thankfully carried on up a nearby tree. Anyway I managed to grab it again and after some help from my school colleagues we managed to get a noose over its head and successfully capture it. 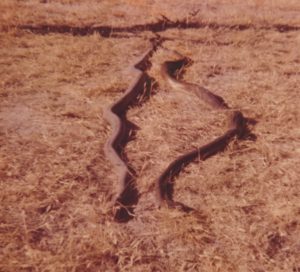 Sadly my teachers would not allow me to keep it in camp due to it being so dangerous so it was decided to keep it as a specimen for the museum. Unfortunately the body had decomposed by the time we returned to school. The photo shows two mambas. The 2nd one was in the camp the very next day and having read up a bit more about them the previous night and knowing the outcome from that incident I had no choice but to dispose of this one too. That incident has a funny story to it as well but you will have to listen to it around the campfire one day.

In hindsight it would have been better to have released it but times were different in those days and collecting was still considered an acceptable form of conservation then.

The following year our expedition headed off to Hwange National Park and this was to be my first serious bite incident. About 8pm one of the boys came down to the fireplace carrying a snake and asking what it was. Being the self-proclaimed expert I took hold of the snake and immediately identified it as a wolf snake. That was my first mistake and one that is made over and over by inexperienced people. It was in fact a Stiletto snake and it took exception to me and immediately bit me on my wrist. The teacher said don’t worry there’s only one puncture wound so it will be fine. Well! 10 minutes later I had a swelling the size of a golf ball. I had put the snake into a bottle and took myself off for a bath with the snake and my book and I spent the next hour working out what it actually was, by which time my forearm had swollen to double its normal size. I informed my teacher of my identification and he said OK, take two panados (paracetamol tablets) and go to bed. I did so and the next day I stayed in bed being excused from all camp duties and wondering what was going to happen to me. Amazingly when I woke up the following morning all swelling had gone and there was no sign of having been bitten. That was one very lucky escape when you read that so many bites from this species end up with a finger amputation.

Roll on 15 years later and my 2nd potentially serious bite occurred from a puff adder while working at Thornybush Game Lodge. I had caught it and taken it up to the conference room to show our guests. I asked them if they wanted to see its fangs to which they all replied yes please. In the process of trying to open its mouth I must have relaxed my grip slightly and it twisted round and vented its anger on me. I immediately released the snake and then asked the guests if they had seen the fangs at which point they replied “No, we’re still waiting”. My response was “Sorry but you were too slow” and it was only then that the penny dropped and they realised what had happened. I have to admit I was quite calm as there no immediate pain and I left it at that. However the receptionist didn’t and she summoned me to talk to the doctor on the phone. He asked if I was concerned and I said “No”. He said “OK but if you get worried take 2 panados!” That was a serious case of deja vu and I couldn’t help but see the funny side to the story much to everyone’s confusion. Anyway I took the panados and only suffered minor swelling to one finger and was in fact on game drive 2 hours later. The snake had in fact bitten me twice as I discovered a couple of weeks later when I squeezed out a broken fang from the back of my hand!

As a snake handler you often get asked how many times you get bitten and the best in the industry will save “never”. However some of us have not been so fortunate but I have been lucky and I got away with it on these two occasions and have only had a couple of other non-serious incidents.

The photos below are a selection of other photos taken during my school days, 2 different pythons and the central one is a Sundevall’s Shovel Snout 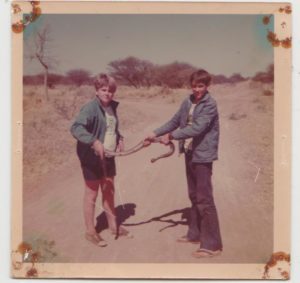 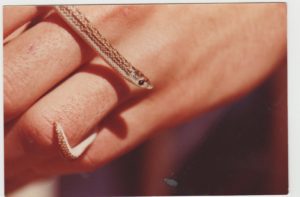 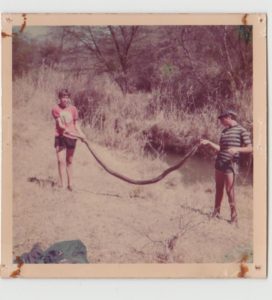 There are countless other stories I can tell as you can I imagine after 50 years of messing with reptiles. However you will need to sit me down with a beer or Gin and Tonic around the campfire when you come to visit us at Antares Bush Camp if you want to hear more. Just a few words of caution to everyone reading this