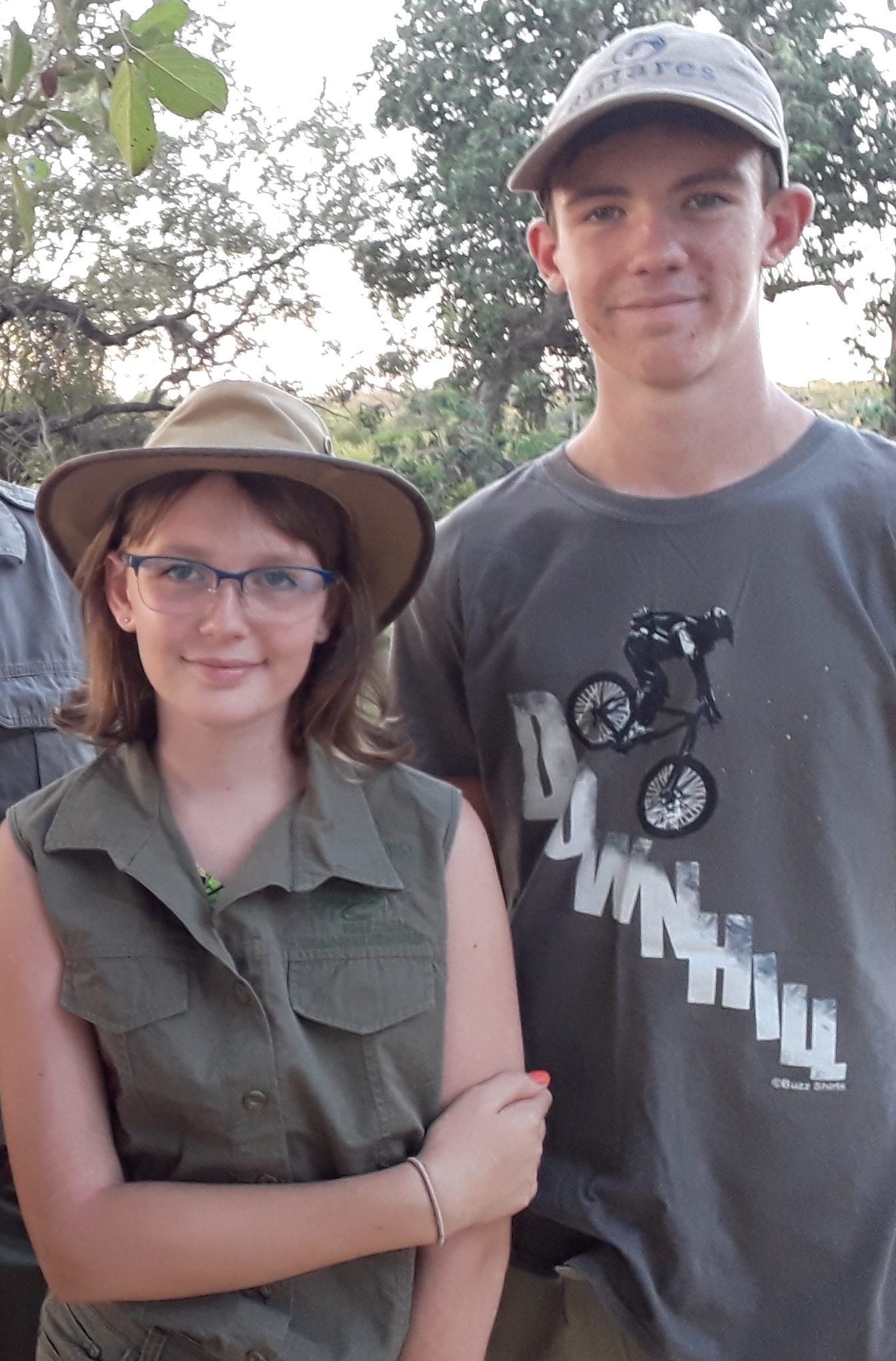 I’ve been asked many times by my friends and family living in the UK, how do you manage bringing up two young children in the African Bush? My reply to this is “INTERESTING, life is never dull and no two days are alike!”

I suppose I’m lucky as living in the bush on a game reserve surrounded by wildlife has always been my dream and I’m not at all phased by it, I suppose I see it as one big adventure! So when Ian and I decided to start a family I wasn’t at all fazed by the fact that we had to drive for 3 hours to the nearest hospital and that I had no immediate family support around me.

I remember saying on our way to the hospital for an induced labour that “if my waters were to break on the way at least we had a township area we passed through where there would be many ladies or ‘Gogos’ (granny’s) that would know what to do!” Thankfully that didn’t happen either time and I had a relaxed birth.

Cary now 16 years old and Savanna now 12 years old are both real bush children and are so lucky in the experiences they have had and still have living on a game reserve.

I remember setting up Cary’s cot in anticipation of his arrival and one day I was faffing around with it, (as an expecting mum does), to discover a baby African Rock Python had slithered into it!! I’m not sure if this was a sign of things to come but Cary has always been fascinated by snakes from a young age as has Savanna.  I suppose having a dad that has also had an interest in snakes since childhood doesn’t help. I’ll leave Ian to tell you a few stories of his snake catching days as a child. 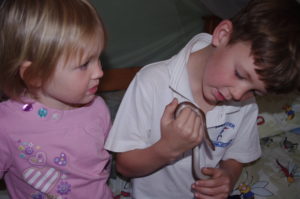 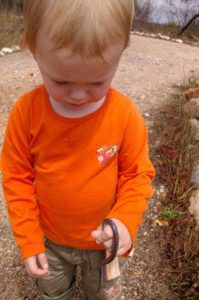 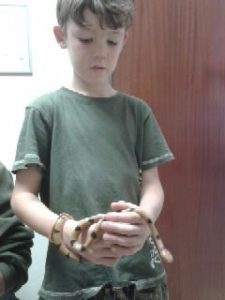 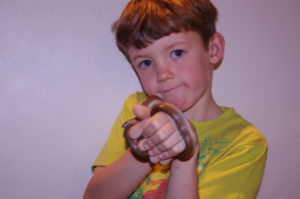 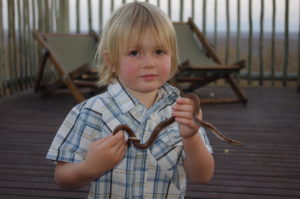 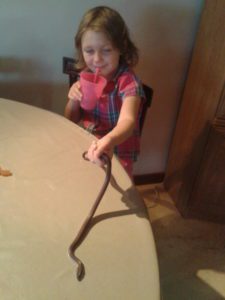 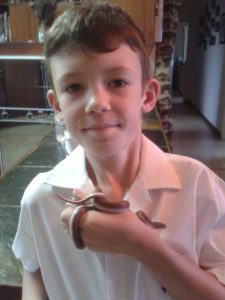 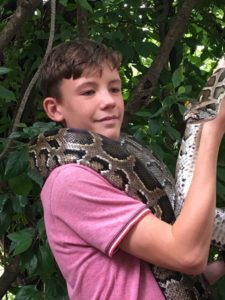 And no they have not grown out of catching and playing with snakes. However I do have one rule ……….. No catching or handling of any venomous snakes!! 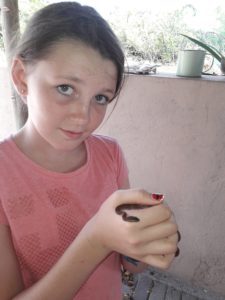 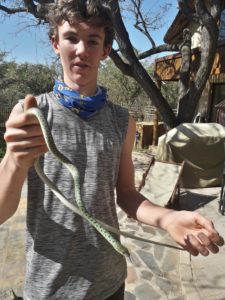 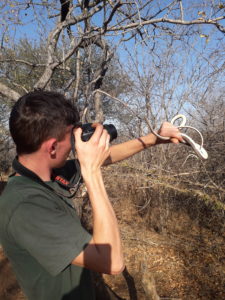 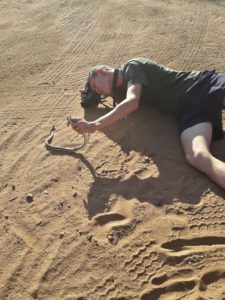 Apart from snakes the children also have had the privilege to get up close and personal with a number of other animals, sometimes a little to close! 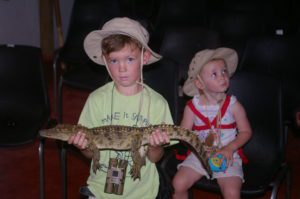 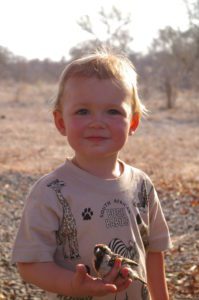 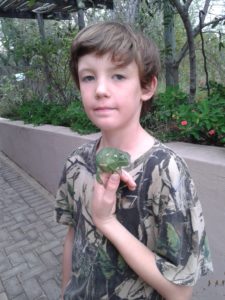 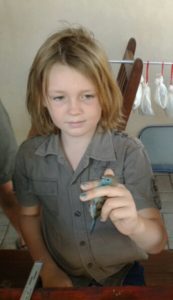 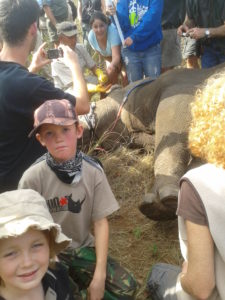 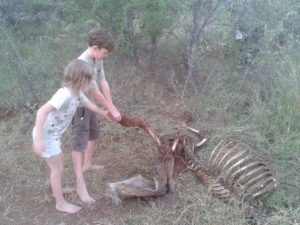 Another interesting animal incident happened one morning when we were getting ready for school and I started to brush Savannas hair and discovered a scorpion nestled in her hair!!! I quickly managed to catch it on a piece of tissue and sent it flying out the window. I don’t want to think of what could have happened if it had stung her on her head, it was a small Uroplectes which is venomous but not deadly, however I am sure a sting on the head could be very very painful.

Whilst growing up they both enjoyed interacting with the students we used to train when we ran a field guide training center. Often the students would ask Cary for the answers to questions they had been set!

Initially they attended a primary school 30km away where I also worked as an assistant, but due to a number of reasons we decided to homeschool until it was time for them to attend high school. A number of people ask me ‘how did I manage to homeschool, especially after this recent time of schooling at home due to covid?’ I have to say it was nothing like the recent schooling at home as we were not answerable to a teacher and a big class. We thoroughly enjoyed our homeschooling time and would often get interrupted by Elephants walking past the classroom or would head out on a game drive first thing before we started the day. Sometimes we would even take the classroom to the bush, however we had a few occasions when we were joined by herds of Elephants and had to take drastic measures! 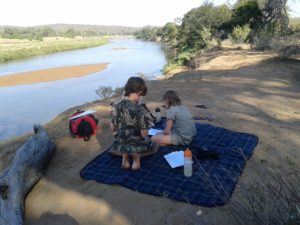 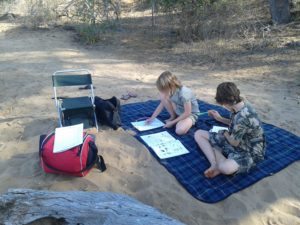 They now have the privilege of attending a superb school in the bush ‘Southern Cross School’. How often do you get wild dogs running through the school grounds when you are sitting during assembly or an antelope giving birth in your playground or Leopards making a kill outside your classroom? The school has a very strong focus on environmental issues and uses the bush whenever they can in their lessons and excursions. 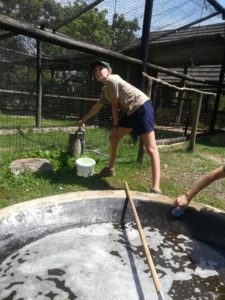 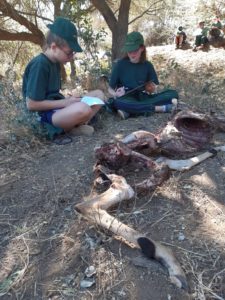 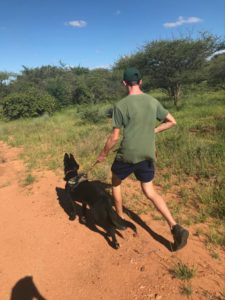 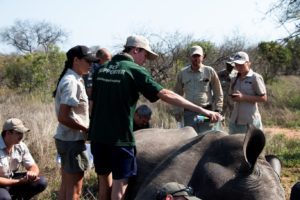 I tell Cary and Savanna many times that they just don’t realise how lucky they are to be growing up in the bush like they do; I would have given my right arm to have had the life they have, and they truly are privileged.

I think this is enough chat about the kids for now so until next time,