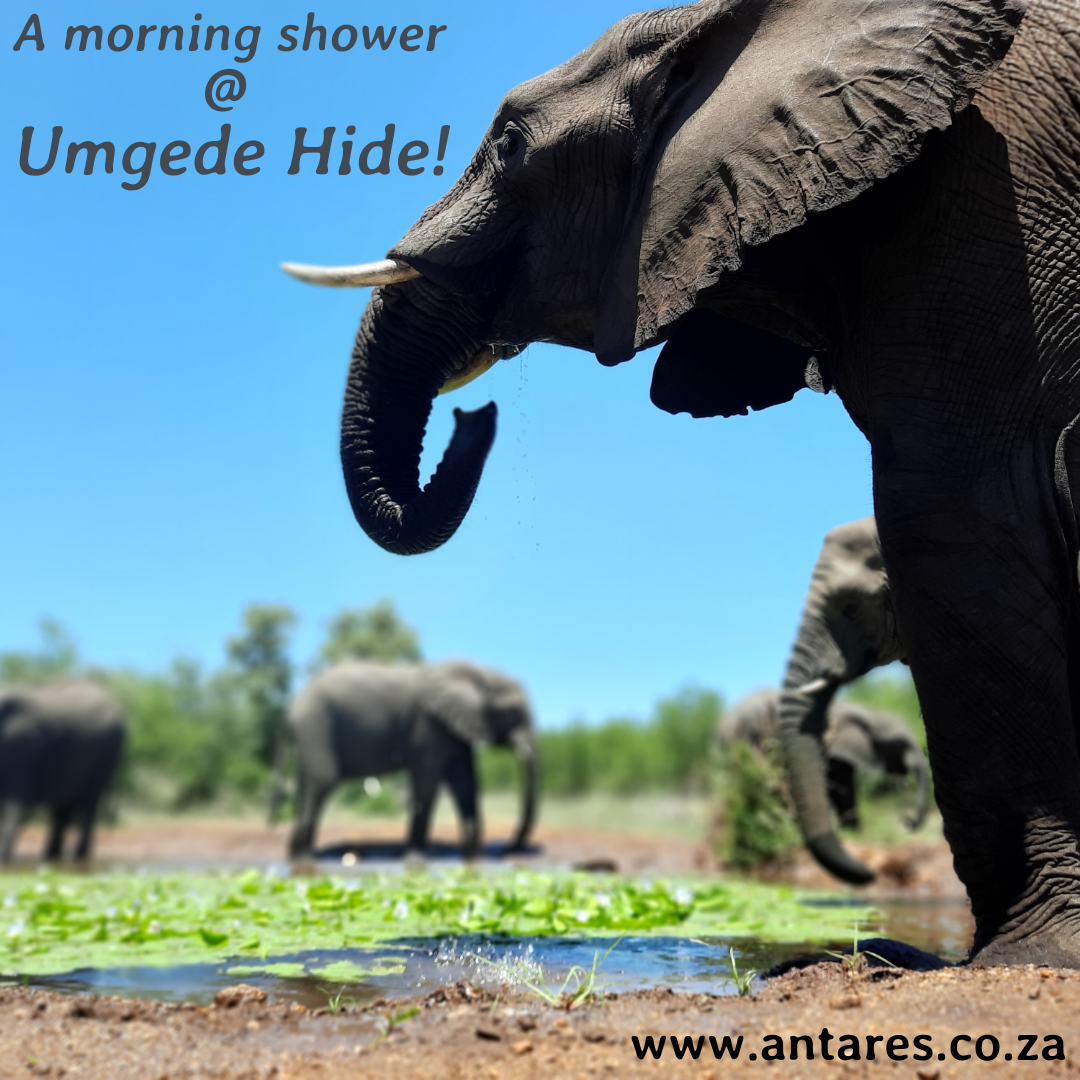 These first few blogs may jump around a little as I don’t want to bore you with all the history about our family life at Antares but I would also like to share some recent experiences at the new camp.

Recently when we were hosting some of the management team from Birdlife South Africa and Dianne Tipping-Woods from Afribird is definitely one of those experiences I’d like to share, however I’m not sure if you will be able to appreciate the full wow factor! You will just have to come and experience it for yourself.

I had made sure I was up early and sitting in the hide, as the bush was waking up and I was enjoying the peace and tranquility of Umgede hide, much to Cary and Savanna’s dismay as they were at the house getting ready to start their day studying for their upcoming end of term exams.  Sitting in the hide on your own with a morning cup of coffee and croissant is truly relaxing and you quickly forget about reality and any jobs you need to do – (a real treat for a busy mum of two!). Already I had seen a bull elephant come to drink and a slender mongoose run past the waterhole, too quick to take a photo, as well as numerous bird species come for their morning bath and drink!

Anyway just as Ian and guests arrived back from their morning game drive a breeding herd of elephants were walking down to the waterhole to quench their thirst, needless to say Ian and guests rushed down to the hide to enjoy the sighting. Well, they needn’t have rushed, as for the next hour we were joined by not one but four different breeding herds of elephants, one after another! We must have seen between 70 and 100 elephants come to drink! 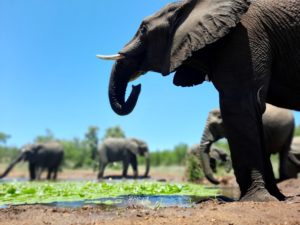 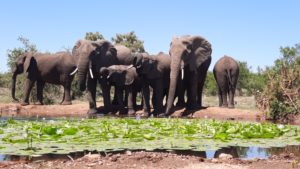 Dianne and I were in what you could say the perfect seats. During the hour with the elephants we were treated to some amazing interactions and sightings that we will never forget. Some of the elephants came to drink right next to the hide windows; they were so close that we could have plucked a hair or two from their tails to make a perfect elephant hair bracelet, not too sure the elephant would have approved! 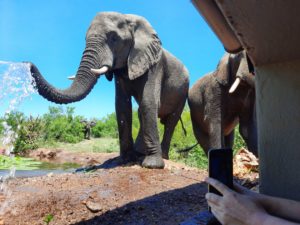 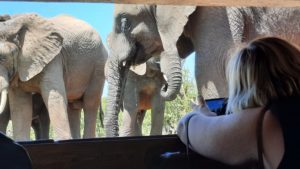 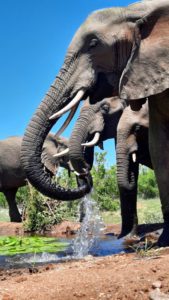 We were all in awe watching the first herd of elephants drinking and playing in the water when out of the bush walked another herd. It was interesting watching their reactions to each other and the new herd chased the original herd off. This time some of the elephants came up to the hide’s window where we were sitting and put their bums in our faces and drank. We were so close that you could see every little detail and see how soft and squidgy their feet really are and perfectly aligned with huge toe nails.

Its quiet remarkable to hear an elephant gurgling the water in their mouth and the swishing of their tails, even the flapping of their ears against their bodies but it is something else to be sprayed at close quarters by a trunk full of water! This happened not once but numerous times by various elephants next to the window. We had to be careful not to get the camera equipment too wet, I have to say that I ended up chewing on grit for quite sometime ….. I’m not quite sure how I managed to get it in my mouth but on several occasions I was covered with water, oh and my white t-shirt now has muddy patches all over it! The smell of the elephants was also something special; it was a mixture between horse manure and muddy water.

It really was a truly remarkable experience. I can’t begin to explain how I felt but as one of our guests rightly said “he had to keep pinching himself to check he really was there witnessing this remarkable experience” I was also feeling rather guilty as a mother that both Cary and Savanna were missing this sighting and having to study! ……. I’ll leave it to your imagination as to how they reacted when they found out! Take a look at a video of this amaxing encounter on our YouTube channel On Safari with the Owtrams 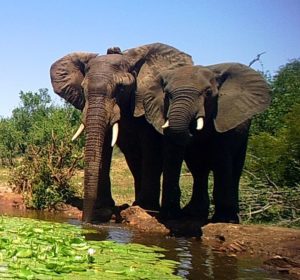 Wayne, being a young elephant, has not yet developed any distinguishing features on his ears. His tusks are not fully developed and until he comes into his own, we can best identify him by his collar and related movements.

MORE ABOUT THE ELEPHANT:

We met Wayne as part of a group of three young bulls that were living like refugees in the Blyde River Mountains more than 20 km away from the safety of the protected areas. Mostly they kept to themselves, keeping to the shadows of the riverine vegetation and only venturing close to human infrastructure at night. They raided the local mango and butternut farmers under the cover of darkness. The provincial administration had kindly given us two weeks to address the situation, otherwise action would be taken with the bulls already branded as ‘Damage Causing Animals’. Every night we went out to the farms using our tried and tested methods to keep them away from the farmers. We ­ injected dry elephant dung boluses with a very strong concoction of chilli. Then we lit the dung balls after strategically placing them on the perimeter of the crops to provide an unpleasant smoke screen to keep the elephants away. It worked but was labour intensive. The bush they were hiding out in during the day was too dense to use a helicopter to access them while no truck could get near them. After buying a tracking collar, we had one failed attempt at collaring one of them on foot as they outpaced us while the light was failing. We persisted and tried again so as not to give up on these sneaky grey giants. With one of the best trackers in South Africa (Andreas Liebenburg), we managed to collar Wayne in honour and remembrance of our dear strategic partner, Wayne Lotter, who was murdered in Tanzania for doing his job too well, working to protect elephants from the ivory trade. With Wayne collared it became easier to understand their movement patterns and soon we were able to dart all three elephants (Wayne, Derek and Lotter) and truck them back to safety. A year since these events, the trio with Wayne at the helm still test the boundary of the reserves and keep us vigilant. They probably remember the succulent sweet mangoes they feasted on and are dissatisfied with the dry vegetation they are now forced to eat. These elephants’ lives depend on what mercy and compassion we as humans have to offer them. Our hearts are heavy that we as a human race, could not offer Wayne Lotter the same. We are determined that Wayne’s spirit will live on with every leafy footprint that Wayne the elephant leaves in African soils.

Wayne’s core range is within Balule Private Nature Reserve. As he is continually testing the Olifants River boundary for any weaknesses in his route back to the mangoes, his core range borders the barrier that prevents his wanderlust. We look forward to seeing where he will one day establish his musth and non-musth range as he matures over time.

Elephants Alive undertake a variety of research projects which in turn contribute to the survival of the African Elephant. See the link to their website to get to know more about them and how you can assist.

The weekend sightings of these magnificent grey giants were absolutely very special and I truly hope that some of you reading this also get to experience what Umgede Hide has to offer.

Until next time, Mel.